E85 is a blend of gasoline and denatured ethanol containing up to 85 percent ethanol and is the highest ethanol fuel blend available in the market. E85 can only be used in flex fuel vehicles (FFVs) which are specifically designed to run on this fuel or any gasoline or ethanol blend ranging from E0 to E85.  Much like diesel fuel, E85 is available at specially-marked fueling pumps.

Expanding use of E85 as a vehicle fuel would increase use of renewable fuel and reduce dependence on imported oil. E85 can also provide important reductions in greenhouse gas (GHG) emissions as compared to petroleum-derived gasoline or lower volume ethanol blends.

Before we draw up the comparison between E85 and your everyday fuel, let's breakdown what the designation actually means. For most drivers, your everyday gas station will have three different octane levels to choose from: Octane ratings are measures of fuel stability. These ratings are based on the pressure at which a fuel will spontaneously combust (auto-ignite) in a testing engine. The octane number is actually the simple average of two different octane rating methods—motor octane rating (MOR) and research octane rating (RON)—that differ primarily in the specifics of the operating conditions. The higher an octane number, the more stable the fuel. Retail gasoline stations in the United States sell three main grades of gasoline based on the octane level:

Some companies have different names for these grades of gasoline, such as unleaded, super, or super premium, but they all refer to the octane rating.

Of the 18 isomers of normal octane (C8H18), octane gets its name from the 2,2,4-Trimethylpentane compound, which is highly resistant to auto-ignition. This iso-octane has been assigned the reference value of 100 for testing purposes. The extremely unstable normal heptane (C7H16) molecule is the 0 octane reference fuel.

How does the octane level affect my vehicle?

The competition between the intended (controlled) and unintended (spontaneous) combustion causes the energy from the burning fuel to disperse unevenly, which can cause damage and place high pressure on the engine's piston before it enters the power stroke (the part of the cycle when the piston's motion is generating power). 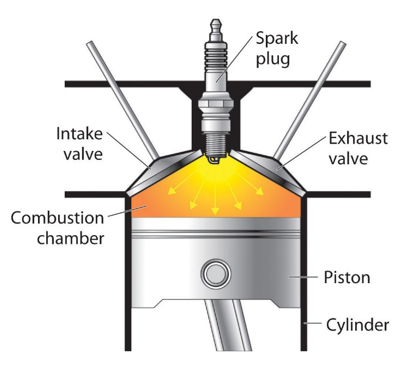 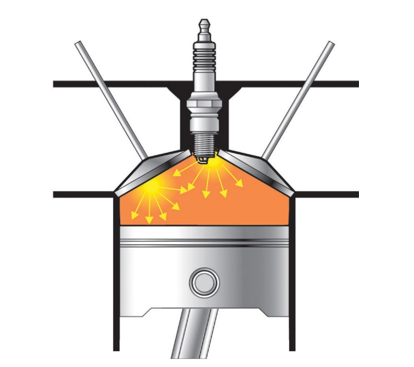 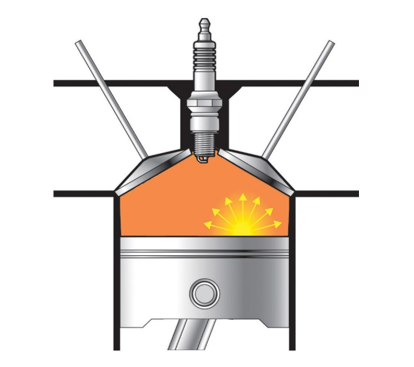 Preignition in an engine cylinder

Before electric computerized ignition was widely used, this knocking commonly occurred and could cause significant engine damage. Most modern engines have sensors to detect knocking. When detected, the computer delays the initial spark, which causes the controlled combustion to take place at a point when compression is not at its highest point. Although this eliminates the knock, it can cause the engine to run less efficiently.

A similar undesirable condition is called pre-ignition, when the fuel ignites on its own before the spark ignites it. Modern engine computers minimize this condition by controlling the timing of valves and fuel injection; however, this control mechanism can also come with a fuel-efficiency or emissions penalty.

How is octane measured?

The standard means of testing octane is with an octane testing engine. This test is similar to the way the mass of an object can be determined by comparing it to objects (references) of known mass on a balance scale. Primary Reference Fuels (PRF) of precisely known octane are formed by combining iso-octane, heptane, and other well-known standards such as toluene. These PRFs are used to bracket a given fuel sample to determine the pressure at which similar knock intensities are observed. This measurement is taken by adjusting the octane engine's cylinder height, which changes the compression ratio/pressure in the engine until the knocking reaches a specific intensity level.

The (R+M)/2 you see on the label refers to the average of the research octane number (RON) and the motor octane number (MON) ratings. To determine the RON, the fuel is tested under engine idle conditions with a low air temperature and slow engine speed. To determine the MON the fuel is tested under the more stressful conditions of higher air temperature and engine speed.

Historically, RON and MON were determined on separate testing machines specifically configured for each test. Current designs (see image below) allow the same engine to perform both tests. Despite this flexibility, many testers still prefer to use more than one machine with each specifically set up and calibrated to perform either RON or MON tests. 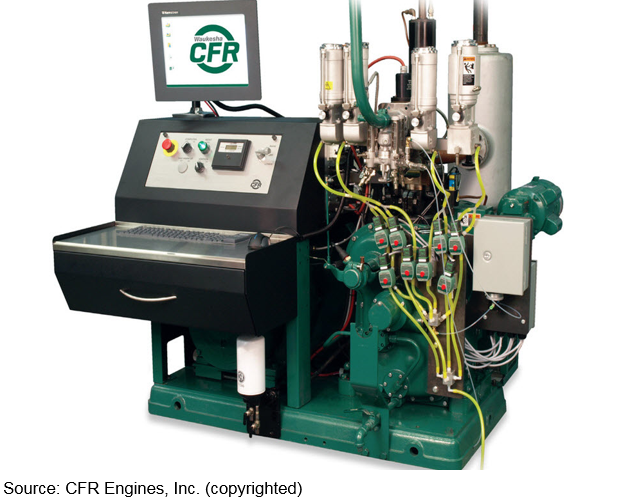 Will make more horsepower using E85 ?
In theory, the answer is yes, if your fuel system is calibrated correctly (i.e. air to fuel ratio is balanced). Ethanol fuel has a faster burn rate, a faster expansion rate and a faster flame front than gasoline. Horsepower is created by expanding gas pushing your pistons down in the cylinder. Pushing the piston harder and faster makes more power. Due to this, E85 does not require special tuning or timing to increase power. In naturally aspirated applications, we generally see 7-8% more wheel HP. With forced induction, it is normally 10-11% more wheel HP. Similar torque gains are observed. Dyno readings may vary depending on the setup of your system. It is best to consult a tuning specialist prior to proceeding with a Dyno test if you plan to try running E85.

If your engine is tuned right, it can gain up to 20% with flex fuel. Here’s why:

There’s a reason professional racers prefer alcohol-based fuel. For decades, alcohol has been used in drag racing, NASCAR, IRL, and so on. Alcohol is effective in creating more power because it offers high octane content. E85 is up to 85% ethanol, aka ethyl alcohol. So naturally, E85’s high alcohol content makes it the highest octane fuel on the market. This means that the vehicle ECU used together with eFlexFuel does not need to retard ignition or lower the boost pressure in any circumstances. This means more performance – just when you need it.

E85 is popular in racing because the engine runs cooler with E85 than with gasoline. This is because Ethanol has over 1/3rd of oxygen by mass, which is higher than in oxygenated race fuels, where the levels are below 15% of oxygen by mass. When oxygen is introduced as part of the fuel to the engine; the heat energy is used to change the state of fuel from liquid to gas. Alcohol has nearly ten times the cooling effect when comparing to gasoline. Cooler temperatures mean there's less risk of heat build-up in the motor. Heat build-up can cause all kinds of problems in racing: everything from reduced power output to engine failure.

Ethanol is much purer than gasoline, e.g., the main impurity substance sulfur content is 90% lower in E85 compared to regular gasoline. Sulfur can contaminate catalysts and is a problem for particulate filters. They can quickly become blocked by sulfur, which can permanently damage the engine. Ethanol-powered engines are much cleaner than engines burning gasoline. It matters when it comes to engine power. Clogged-up fuel injectors, for example, don’t create as much power as clean fuel injectors. Speaking of fuel injectors, E85 fuel can actually clean the engine for you. Ethanol is an effective cleaner that can remove deposits in the fuel injectors and throughout the cylinder head.

E85 fuel has a faster ignition time and flame propagation when compared to gasoline. This leads to higher cylinder pressure, as well as increased engine torque and power, gaining up to 20%. The increased exhaust gas flow allows turbos to spool quicker.

8 REASONS TO FILL UP WITH E85 FLEX FUEL

E85 flex fuel is a new and improved version of fossil fuel. It’s a sustainable American-made fuel. It’s made domestically from corn biomass, plant materials, and other renewable sources. Switching to E85 fuel is an excellent decision for many different reasons:

1. E85 IS GREAT FOR THE ENVIRONMENT

E85 is produced in the US, so the supply chain is pretty short. Researchers at the US Department of Energy’s Argonne National Laboratory did a study a couple of years ago. This study confirmed that manufacturing corn ethanol produced much less greenhouse gases than the same amount of gasoline. The carbon intensity of corn production is decreasing all the time as cultivation methods improve and the latest studies point out that the greenhouse gas (GHG) emissions of corn ethanol are 46% lower than in gasoline E85 runs cleaner than regular gasoline. It's because E85 contains a much higher level of ethanol than gasoline. Most gasoline blends sold in the US contain about 10% ethanol. E85 contains up to 85% ethanol. That's a big difference.

When you run E85, you'll reduce a noticeable amount of toxins in the air. A big reason for this is because E85 doesn't contain aromatic hydrocarbons (PAHs). Manufacturers add aromatics to gasoline to increase its octane rating. Aromatics are toxic compounds that pollute the air. E85 already has a high amount of octane, so aromatics don't need to be added to it. Factor in the fact that ethanol burns much cleaner than gasoline, and you've got a much more environmentally friendly type of fuel.

You may have noticed that E85 costs less than regular gasoline at the gas pump. It also costs less money in the long run. It's true that E85 may lower your MPG (but not always). Yet, even if you see a 25% reduction in your vehicle's MPG, you'll still save money with E85. Another major way E85 saves you money is the fact that it burns a lot cleaner than regular gasoline. It even cleans the engine, fuel lines, and exhaust system. By doing that, E85 helps keep your engine in good health. This reduces your total repair and maintenance costs down the road.

Did you know that E85 can give your engine up to 100 more hp (if your engine is tuned right)? To sum it up:

Did you know that E85 is an excellent cleaner for engines? Regular gasoline leaves carbon deposits all over the fuel system and engine, most commonly:

The ethanol in E85 clears carbon deposits from these areas. E85 is such an effective cleaner that some people run one or two tanks worth of E85 through their engine instead of using an engine cleaner. If you regularly use E85, your engine, fuel system, and exhaust system will be in much better shape than if you had used regular gasoline.

Did you know that ethanol is made right here in the US? As of 2021, 27 different states produce ethanol. It's because corn is the primary raw material in ethanol, and we have plenty of that here. It's clear that ethanol is a valuable asset in the US. In 2019, there were over 68,000 jobs in the ethanol industry. That creates a positive economic impact. In fact, the ethanol industry contributes $43 billion to America's GDP. So if you switch to E85, you're helping create jobs within the US.

7. E85 HELPS PROVIDE THE US WITH ENERGY INDEPENDENCE

The US has moved a long way towards energy independence with fossil fuels in the last decade. But, we are still impacted by the global fuel supply and cost crises. Fossil fuel supply and prices are not in our control. We don't have to worry about that with E85. We control the production of E85, so we're not at the mercy of other countries that more or less control the supply of fossil fuel. Our full control over flex fuel means the cost of E85 won't be as volatile as regular gasoline.

8. E85 IS BECOMING MORE AVAILABLE ACROSS THE US

E85 has been a favorite among racers for awhile and it isn't going out of style anytime soon. 10 Second Racing offers several FlexFuel system brands for various performance vehicles. Please feel free to contact our technical support team to assist with any concerns prior to selecting a system. If you found this article helpful, drop a comment below!